Chernivtsi, the capital of the historical region of Bukovina, was formed in the second half of the 19th century in the spirit and style of the Austro-Hungarian Empire - no wonder the city is called “little Vienna”. And at the same time, up to the Second World War, Chernivtsi was the center of a rich, spiritually filled, culturally and intellectually developed Jewish life. The city is still decorated with original buildings erected by the Jewish community. And one of them is “Beit Kadishin”, a ritual building at the main entrance to the Jewish cemetery.

This impressive building in the form of a cubic domed mausoleum was built in 1905. During the construction of “Beit Kadishin”, technologies unique for that time were used: for the first time in Europe, an architect Max Morgenstern designed a huge reinforced concrete dome. 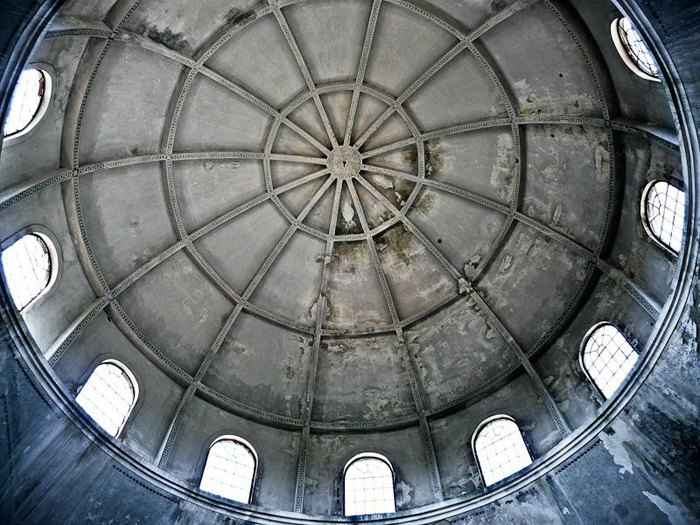 In “Beit Kadishin” were held farewell to the deceased according to the religious Jewish ritual. However, after the Second World War, when Jewish communal buildings had to be closed everywhere, “Beit Kadishin” also did not escape this fate. It was used for other purposes, a warehouse was arranged there, and then the premise turned out to be abandoned.

For the first time about the reconstruction of the ritual building began to talk in the 90s. Then the Austrian journalist Helmut Kuzdat visited Chernivtsi and told about his idea of restoration of “Beit Kadishin” building. And the chairman of the Chernivtsi Jewish Cultural Foundation, co-president of the “Vaad” of Ukraine, Josef Zisels proposed to place in the renovated building a memorial center dedicated to the memory of the Jews of Bukovina who perished during the Holocaust.

Years passed, for the implementation of the project Helmut Kuzdat even wrote a book about Chernivtsi and Jews in Chernivtsi. However, it didn’t help to raise funds for the restoration of “Beit-Kadishin”: the breadth of work is huge and requires very substantial investments. Nevertheless, the search for sponsors continued; at the same time, reconstruction options were being developed.

“Vaad” of Ukraine is directly related to the reconstruction, because in 2015 the city authorities of Chernivtsi for 49 years handed over the “Beit Kadishin” building to our organization, says co-president of the Association of Jewish Communities and Organizations (“Vaad”) of Ukraine Andrey Adamovskiy. - In 2017, the German government allocated 100 000 euros for the exterior repair of “Beit Kadishin”. For the money the facade was repaired and the dome was restored. In general, the repair of the building and the creation of a memorial center will cost about one million euros, although earlier we assumed that 800 thousand would suffice. So far, it has not been possible to accumulate such a sum”, comments Andrey Adamovskiy.

“The building has unique architectural features. We want to keep it authentic. Therefore, the historical building will be fully preserved, and we are planning to build a three-level pavilion on the back side of the building in order to place a museum exhibition there.

The museum is designed for different groups of visitors – local residents and guests of the city, senior schoolchildren and students, people who survived the ghetto horrors, foreign tourists, especially natives of Bukovina, will come here. Therefore, the concept of the museum will be multi-tasking, so that each visitor will not only familiarize himself/herself with a certain historical period, but deeply realize the tragedy of the Holocaust.

In addition, the museum will also become a “museum of the Jewish cemetery” – the exposition will tell about people who are buried near “Beit-Kadishin”, notes Andrey Adamovskiy.

Speaking about the unique features of “Beit Kadishin”, the philanthropist Adamovskiy means the interior of the building, which is of independent value. Restoration of the central hall is planned for this summer. The important part of the decor are memorial prayers on the walls, as well as a monumental memorial plaque with the names of philanthropists – representatives of the Chernivtsi Jewish community, who donated funds for the construction of the building. The plaque was preserved only partially, it was damaged by ruthless time and no less ruthless vandals.

«Сonservation» – such a word Adamovskiy chose to call the specificity of the restoration –it will be carried out with great care, with careful preservation of all authentic elements. 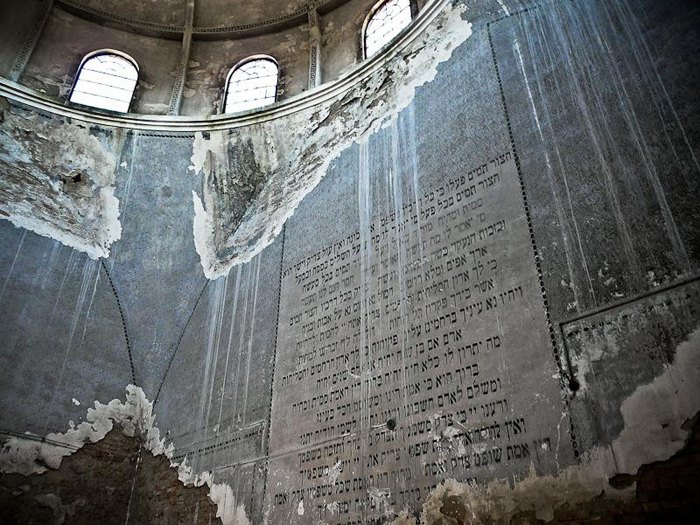 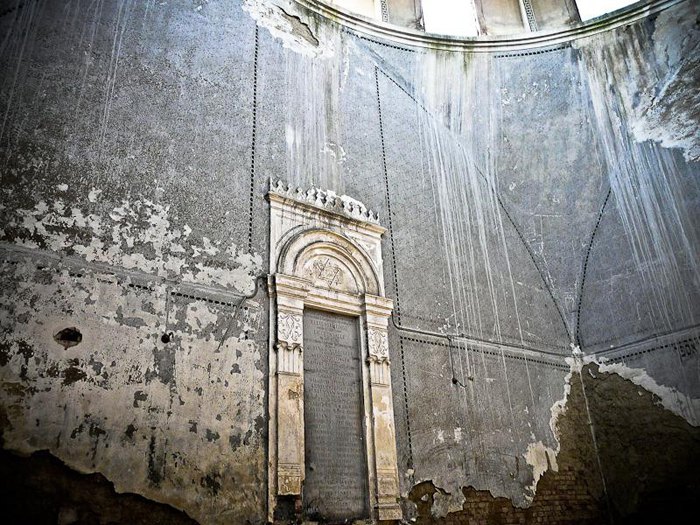 12 windows in the dome have already been restored, and in the near future magnificent three-section doors for entry and exit will be restored. By the way, the restored door portals and windows (with stained glass) are made exactly according to the patterns of the beginning of the 20th century.

The city authorities are also interested in the revival of the building: this year they promise to hold a sewer there.

This is how the building looked like before restoration: 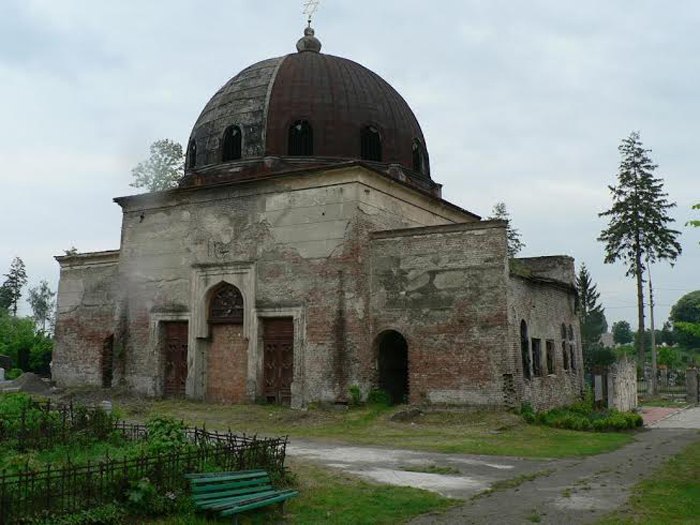 And so it looks now. Pay attention to the restored dome – the copper coating was completely replaced: 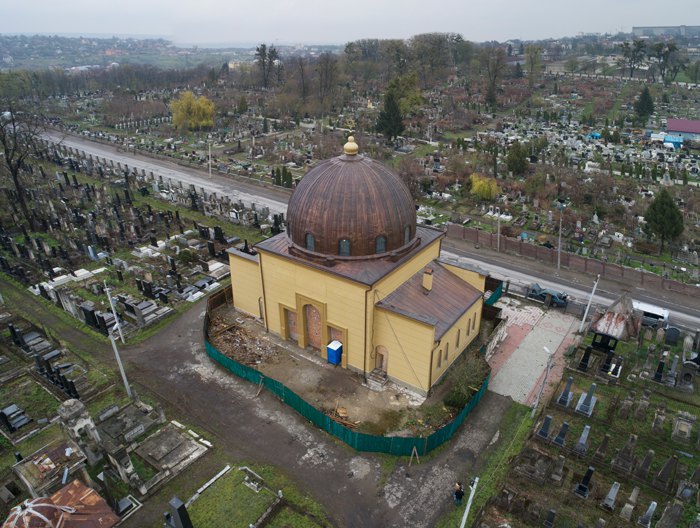 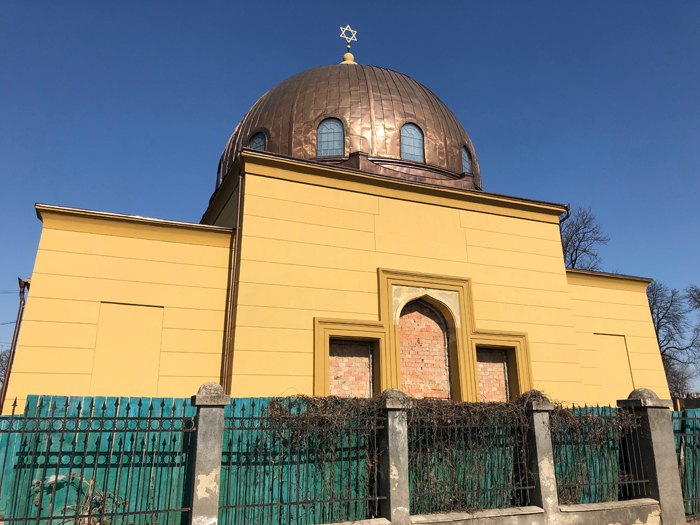 The reconstruction involves the construction of a three-level pavilion on the back side of “Beit Kadishin”, facing the cemetery. The pavilion will be the main part of the museum exhibition. However, it will not violate the historical appearance of the building, since its contours are “inserted” into the facade contour of the existing structure.

“Undoubtedly, a memorial center should be created, taking into account the most modern museum ideas and technologies. The exposition of the future museum will include photographs, preserved documents and authentic objects of that period”, says Josef Zisels. Perhaps the museum will exhibit works of Jewish artists of Bukovina of those times. On the official website of the Chernivtsi Memorial Museum Center of Bukovina it is indicated that one part of the exhibits will be exhibited in permanent exposure, and the other part will be projected onto the walls of the hall in the form of dynamic images in the corresponding magnification. This will give an opportunity to change materials depending on the specific topics of excursions and exhibitions. The organization of temporary exhibitions is also provided.

Project ideologists understand that a significant part of the visitors will be young people, as well as people who do not always know enough about the causes and events of the Holocaust. For them, the emotional component of the exposition is of particular importance, and therefore it is especially important to use modern multimedia tools and computer capabilities that would help bring the events of the past to our days.

“The museum is important for educational work, mainly among young people”, says Josef Zisels. The exhibition will reveal painful questions related not only to the Holocaust, but also to the pre-war period. In particular, we are talking about the occupation of Northern Bukovina by the Soviet Union in 1940, about collaboration and complicity in a crime.

The concept of the memorial museum includes four main thematic blocks and a memorial hall. Visitors will begin to explore the history from the top level of the new pavilion. The Austro-Hungarian period will be represented there (from the middle of the 19th century until 1918). Visitors will then go down and familiarize themselves with the difficult period of Romanian rule in the period between the two World Wars (1918 – 1940) and the short but difficult period of the Soviet annexation of Northern Bukovina (1940 – 1941). On the lower floor of the museum there is a “fall out of humanity” – a hall dedicated to the tragedy of the Holocaust. Then again return to the middle floor – to the post-war time, to the Soviet period, right up to modern Ukraine.

And after that, visitors enter the huge empty hall under the dome – into the “Beit Kadishin” space. Here the Book of Souls unfolds in front of them – a majestic installation in memory of those buried in the Jewish cemetery and those who disappeared in the fire of the Holocaust.

We hope that the project will be supported by the World Jewish Congress, whose CEO is Robert Singer. By the way, he comes from .Chernivtsi. But the main thing is that “Beit Kadishin” has become a public project. Thanks to fundraising, we managed to raise money, even small amounts. We also turned to the embassies of Germany, Austria and Romania. We hope they will respond to our request for assistance”, says Andrey Adamovskiy.

We planned to complete the project in 2019, but now it is clear that there are still about five years of restoration and construction ahead. “This is a long process. We don’t need money to be out of business. It is very difficult to raise funds for projects that exist only “on paper”. You must first start part of the work, and then look for additional funding. I think we should focus on the implementation period of five years. Restoration is delayed not only because of lack of funds. It is difficult to find specialists in the regions for specific tasks related to the restoration. Therefore, some orders are transferred to Kiev or to Lviv. And this is our time”, says Josef Zisels.

Andrey Adamovskiy believes that the best way to realize the idea of restoring “Beit Kadishin” and creating a memorial complex is to work together. Adamovskiy is sure: “Beit Kadishin” is our memory. It must be preserved for future generations. Together we will succeed”.