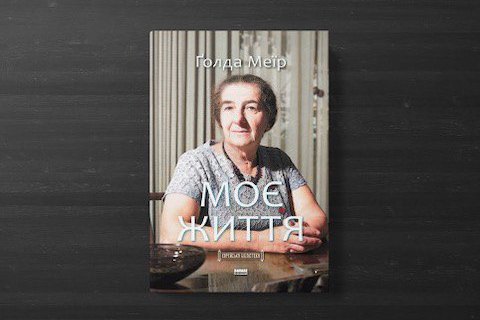 The Jewish Confederation of Ukraine, which initiated the creation of the “Jewish Library” book series, has informed about the publication of another book, the autobiography of the fourth Prime Minister of the State of Israel, Golda Meir. JCU President Boris Lozhkin spoke about the new book and the “Jewish Library” on the JCU website.

As Lozhkin explained, the “Jewish Library” is a book series in which the first translations into Ukrainian of the works about Jews and Israel, which have already gained worldwide popularity, are published.

The “Jewish Library” is published with the support of the Boris Lozhkin Charitable Foundation, the Euro-Asian Jewish Congress and the Ostrozky Princes Foundation of the family of Yuriy and Iryna Lutsenko.

According to Lozhkin, Golda Meir’s life is most closely connected and largely reflects the history of the birth and formation of Israel as an independent state.

Along with tens of thousands of Jews in the early twentieth century, Golda Meir emigrated from the tsarist Russia to escape the anti-Jewish pogroms. She, like many Jews of those years, became interested in the ideas of Zionism, then participated in the development of the lands of Eretz Israel and actively fought for independence. She also had to actively defend this independence shortly after the birth of the Jewish state.

“All these stages, which were directly witnessed and participated in by Golda Meir, are described in a lively and fascinating manner by herself in the book, which became a bestseller immediately after its first publication in 1973,” Lozhkin related.

“My Life” by Golda Meir is considered one of the best examples of memoirs of the twentieth century politicians, so the book will be interesting to the mass Ukrainian reader.

“Now, thanks to the JCU, the life story of one of the most prominent figures in the history of modern Israel, a signatory to the Declaration of Independence, the fourth Prime Minister of the State of Israel, Golda Meir from Kyiv, has become available to the Ukrainian readers and in Ukrainian,” the JCU publication emphasizes.

It has been earlier reported that the first to be published in the “Jewish Library” series by “Our Format” publishing house was the book by Dr. Daniel Gordis “Israel: A Concise History of a Nation Reborn”.