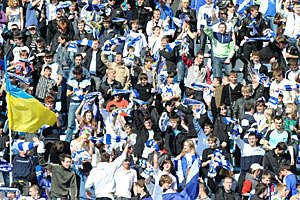 The heads of the National Police of Ukraine, the Football Federation of Ukraine (FFU) and the Premier League agreed on 14 January 2016 that law enforcers would return to stadiums to ensure public order during matches, the FFU has said on its official website.

"A number of important agreements have been reached. In particular, it was decided to bring law enforcers back to stadiums during football matches. Police will also deal with corruption and the problem of fixed matches," the statement reads.

As the first step of such cooperation, the Chornomorets stadium in Odesa will be checked for compliance with the UEFA demands to infrastructure, public order and security on 20 January. Based on results of this inspection, a decision will be made whether to nominate the stadium for UEFA and FIFA events.

Usually, police are not present at European stadiums while public order is ensured by stewards. Ukraine removed police from stadiums on the eve of the 2012 UEFA European Championship.