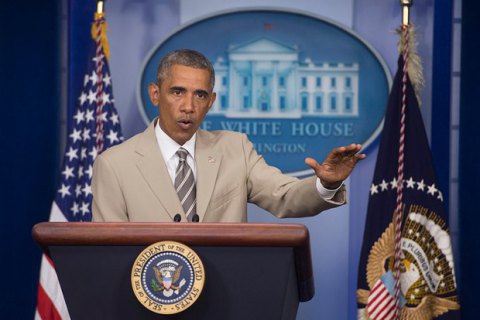 US President Barack Obama has prolonged the sanctions imposed on Russia in March 2014, according to a statement on the White House website.

Obama recalled that the sanctions had been introduced in response to the annexation of Crimea. As Russia continues its actions threatening the sovereignty, territorial integrity and security of Ukraine, it has been decided to extend the sanctions by another year.

"The actions and policies of the Government of the Russian Federation with respect to the annexation of Crimea and use of force in Ukraine conitnue to undermine democratic processes and institutions in Ukraine; threaten its peace, security, stability, sovereignty, and territorial integrity, " the White House said.

As reported earlier, the sanctions have been prolonged with regard to the Russian politicians involved in the annexation of Crimea: Russian MP Yelena Mizulina, Russian Deputy Prime Minister Dmitriy Rogozin, Vladimir Putin's personal advisor Vladislav Surkov, Vladimir Putin's advisor Sergey Glazyev, the chairman of the Federation Council, Valentina Matviyenko, Russian MP Leonid Slutskiy, a member of the Federation Council of the Federal Assembly of the Russian Federation, Andrey Klishas, and others. The sanctions prolonged also concern politicians involved in the suppression of the Euromaydan protests in Ukraine.

According to the US ambassador to Ukraine, Geoffrey Pyatt, the sanctions against the Russian Federation can be reconsidered only after the full implementation of the Minsk agreements. He said that Barack Obama had already discussed this with Russian President Vladimir Putin.