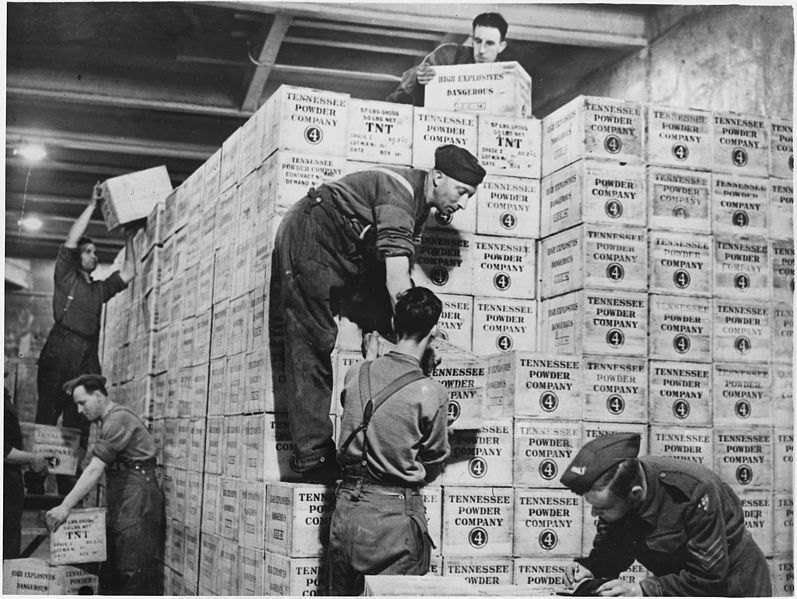 Photo: National Archives and Records Administration
The gunpowder is leased to the United States and stored in an underground tunnel.

American aid to Britain began in September 1940, when the British were left alone against Hitler and fought back with all their might in preparation for the German invasion of their island.

With the adoption of the law on lend-lease, this assistance received a solid legal basis.

The law allowed assistance to any state if its defense was vital to the USA. The conditions were very favourable for those who received assistance.

Weapons and materials lost during the fight were not subject to re-payment.

Material, suitable for civilian use, were to be reimbursed, in whole or in part, after the war on the basis of long-term American loans.

In total, 42 countries were provided with Lend-Lease assistance during the Second World War. But most of it was received by Great Britain and the USSR.

The Lend-Lease assistance for the Soviet Union, which began in October 1941, was of paramount importance.

Russian propaganda from Stalin’s time to the present diminished the importance of American and British aid. Meanwhile, without this support, events on the Eastern Front would have been very different.

A third of the tanks and 16% of Red Army fighter aircraft, which took part in the battle of Moscow, were provided by Western allies.

In total, the Soviet Union received a Lend-Lease of almost 15,000 aircraft, 7 thousand tanks, 376 thousand trucks and 51 thousand Jeeps along with 15 million pairs of army boots.

And many other material, equipment and food – up to 257 million buttons.

The USA and Britain supplied the USSR with 10 times as many railway cars as the Soviet Union produced during that time, two and half times as many engines, a third of all explosives and a quarter of aviation fuel and more than half of its aluminum.

In total, Britain received $31 billion in aid under the Lend-Lease program, while the USSR received $11 billion. This was in the early 1940s, when the dollar was worth 20 times less than it is now.

After the war, the Soviet Union refused to pay even a relatively small debt of $1.3 billion expected by the Americans. Later, the amount of debt was constantly declining as per USSR requests, and after its collapse – Russia paid the Americans a ridiculously small amount.

The United Kingdom paid its $5.5 billion debt to the USA and Canada by 2006. In other words, the Lend-Lease payments were symbolic, especially when compared to the amount of aid provided and its significance in winning the war.

Now, for the first time since the Second World War, the United States is re-instating this Lend-Lease law. This time for Ukraine.

Western partners have already provided Ukraine with a significant amount of weapons that help destroy enemy equipment on land and in the sky and soon at sea.

According to the chairman of the Joint Chiefs of Staff, General Millie, Ukraine has already received 60,000 anti-tank units and 25,000 anti-aircraft weapons.

After the adoption of the Lend-Lease law, Ukraine will receive much more and more powerful weapons. Under a simplified procedure and essentially for free.

As eight decades ago, this aid could play a pivotal role in the war against the Nazi regime. This time – the Russian Nazis.

The victory of the Ukrainian army with powerful Western weapons will help Ukraine not only survive but win.