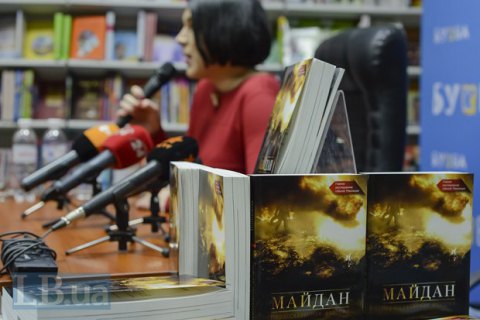 "The second leader was the book by Sonya Koshkina, "Maydan. The Untold Story" (in Ukrainian and Russian, a total of 24,000 copies), a unique timeline and the main investigation into the events of the Revolution of Dignity, a collection of unique facts and sincere accounts of the main characters of this historic winter from both sides of the barricades. A bestseller and the most headline-making book of 2015," he said in particular.

The book, which answers the questions on who planned and carried out an attack on students in November 2013, who was behind the 1 December massacre in Bankova Street, who brought grenades from Russia and what Viktor Yanukovych did in his last hours as the president, was published in February 2015 in Ukrainian and Russian. Its presentation tour visited Kiev, Zaporizhzhya, Lviv, Cherkasy, Dnipropetrovsk, Kryvyy Rih, Odesa, and London. It is currently being prepared for publishing abroad.

You can learn more on the official website of the book or buy its electronic version here.

The bestseller among the top-20 books of Bright Star Publishing is Sergei Loiko's Airport, an account of the siege of Donetsk airport by pro-Russian separatists.