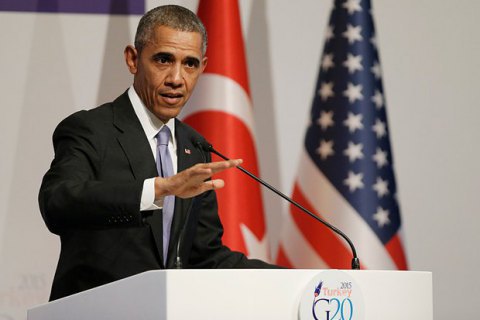 US President Barack Obama told about his attitude to Russian President Vladimir Putin and also about today’s position of Russia in the world arena in the interview to the American edition The Atlantic.

"The truth is, actually, Putin, in all of our meetings, is scrupulously polite, very frank. Our meetings are very businesslike," Obama said and pointed out that Putin believes his relationship with the USA is more important than Americans tend to think. "He’s constantly interested in being seen as our peer and as working with us, because he’s not completely stupid. He understands that Russia’s overall position in the world is significantly diminished. And the fact that he invades Crimea or is trying to prop up Assad doesn’t suddenly make him a player. You don’t see him in any of these meetings out here helping to shape the agenda. For that matter, there’s not a G20 meeting where the Russians set the agenda around any of the issues that are important"

According to Obama, Putin’s actions in Ukraine were a response to a client state that was about to slip out of his grasp. "And he improvised in a way to hang on to his control there," the American leader pointed out. "He’s done the exact same thing in Syria, at enormous cost to the well-being of his own country. And the notion that somehow Russia is in a stronger position now, in Syria or in Ukraine, than they were before they invaded Ukraine or before he had to deploy military forces to Syria is to fundamentally misunderstand the nature of power in foreign affairs or in the world generally. Real power means you can get what you want without having to exert violence. Russia was much more powerful when Ukraine looked like an independent country but was a kleptocracy that he could pull the strings on."

Obama also expressed his opinion that Ukraine is of great interest for Russia but not for the USA, that is why Russia will always be able to maintain escalatory dominance there.

"The fact is that Ukraine, which is a non-nato country, is going to be vulnerable to military domination by Russia no matter what we do," the US President emphasized. Hi thinks that his position on Ukraine is "realistic" but "is an example of where we have to be very clear about what our core interests are and what we are willing to go to war for. And at the end of the day, there’s always going to be some ambiguity," he added.