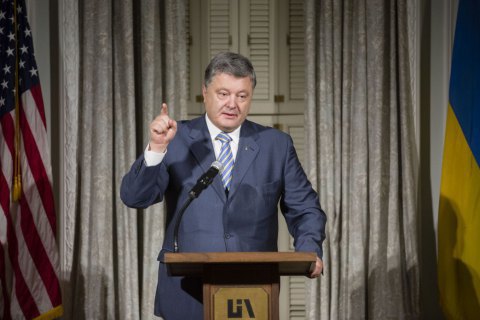 President Petro Poroshenko started his visit to the United States, where he is slated to give a speech at the 71st session of the UN General Assembly. He is also to take part in the Summit of the UN Security Council and a high-level meeting devoted to the problems of refugees and migrants, his website reported on 19 September.

Poroshenko also plans to hold a number of meetings on the sidelines of the UN General Assembly, including with top politicians from Turkey, Japan, New Zealand, Argentina, Qatar and others.

Special attention during the visit will be paid to deepening Ukraine's strategic partnership with the United States. In this context, Poroshenko will meet with US leadership, representatives of the country's leading business and political science circles.

During the visit, the president has already met with the Ukrainian community in the United States, where, in particular, he noted the importance of maintaining and strengthening sanctions against Russia.

"Russia's violations of human rights in the occupied territories, including in relation to the Crimean Tatars, requires the introduction of additional sectoral sanctions," Poroshenko said.

Poroshenko urged representatives of Ukrainian diaspora to jointly work out an action plan of sanctions, "a modern equivalent of the Jackson-Vanik amendment."

An equally important issue, Poroshenko said, was receiving lethal weapons and other military assistance. "Over the past 2.5 years we have proved that we can be trusted and relied upon. We have demonstrated that Ukraine has never led and will never lead any wars of conquest. No threats have ever originated from Ukraine. It is perfectly safe to give us lethal weapons. For our land, we will fight up to the last ditch, "Poroshenko stressed.

The president's visit to the USA will last until 21 September.