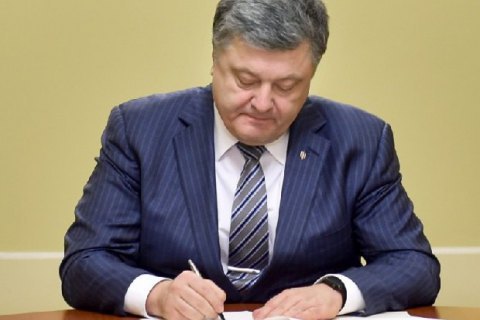 President Petro Poroshenko has vetoed a bill providing for the implementation of state support for the film industry at the expense of deductions from incomes of lottery operators, presidential press service said in a release on 17 November .

The president stresses the need to strengthen state support for cinematography in Ukraine and reminds that the draft state budget for 2017 provided for 500m hryvnia in the development of Ukrainian cinema.

The head of state believes that the bill suggests a range of norms that promote conditions for the development of the nation's film industry, the introduction of transparent procedures of the project financing, and lays down the basis for the enforcement of intellectual property rights.

Nevertheless, Poroshenko returned the bill to parliament with proposals for improvements in order to bring its provisions into compliance with the Constitution, the Budget Code, as well as the norms of other legislative acts.

The president believes, in particular, that the mechanism of state subventions for the return of the qualified costs (rebate) laid down in the bill has to be improved based on the principles defined by the budget and tax legislation and issued as a separate law.

The head of state hopes that the Rada will soon finalize the bill, taking into account the suggestions made.