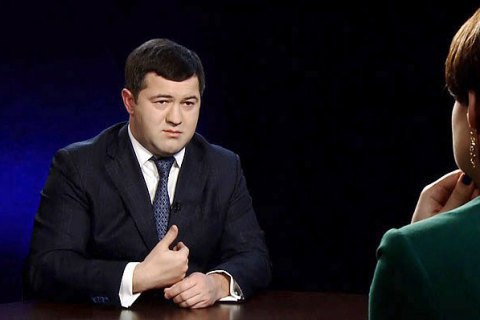 The State Fiscal Service (SFS) is holding an internal investigation into the head of the Transcarpathian customs, Volodymyr Kolesnikov, on suspicion of violations of customs legislation, SFS head Roman Nasirov has said in a TV interview with Sonya Koshkina on the Left Bank talk show.

"[Kolesnikov] is not dismissed, He is under official investigation, but, indeed, he is suspended. The situation on the Transcarpathian customs is different from Odesa. Just as Hennadiy Moskal, I am concerned about the smuggling problem, and there is a possibility that it does exist at the Transcarpathian customs. Volodymyr Kolesnikov, who, in your words, is Moskal's protégé, was appointed by me. I have supported and do support him. However, the prevention of smuggling boils down to the issue of personnel appointments, whom and to which posts and shifts Kolesnikov has appointed. I do not know whether charges against him are founded. I hope not," said Nasirov.

Nasirov flatly denied any confrontation between him and the governor of the Transcarpathian region Henadiy Moskal, and any connection between Kolesnikov's suspension and a recent interview by Moskal, in which he blamed Kyiv of hindering the work of local customs.

"In terms of customs activities, we only help. And we are trying hard to prevent breaches of customs legislation, even harder than Moskal does," Nasirov responded.