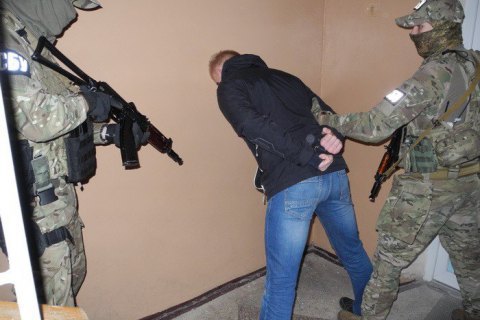 The officers of the Security Service of Ukraine (SBU) detained in Lutsk an organizer of fake protests aimed at destabilization of the socio-political and criminal situation in the western regions of Ukraine.

In a statement on Tuesday, 21 November, the SBU said they have established the involvement of some residents of Lviv Region in the organization and conduct of "rallies on order" in Lviv, Rivne and Kyiv. Law enforcers obtained documented evidence that the perpetrator received funds and guidance from the Russian special services for the pseudo protest rallies.

Investigators say that Russian curators paid 4 to 10 thousand dollars for the organisation of one such rally.

The organizer hired and organised groups of low-income citizens, controlled the production and dissemination of campaign materials with calls to hit the streets and contained incitement to riots.

For Rivne Region, protests actions were supposed to call for "combating the amber mafia". If the authorities ignore the demands of "protesters", the protesters, according to the scenario, should demand full autonomy for the region.

Law enforcers established the whereabouts of the perpetrator and detained him in a rented apartment in Lutsk. During the warranted search, law enforcement officers seized communications equipment used for coordination with foreign curators and found electronic correspondence with instructions.

The detained citizen is taken into custody and will face charges of encroachment on the territorial integrity of the country, the SBU said.

On 15 September, the SBU prevented an attempt to hold a fake rally of "mothers of ATO participants" in Kyiv.

On 6 September, a similar rally was attempted in Lviv.