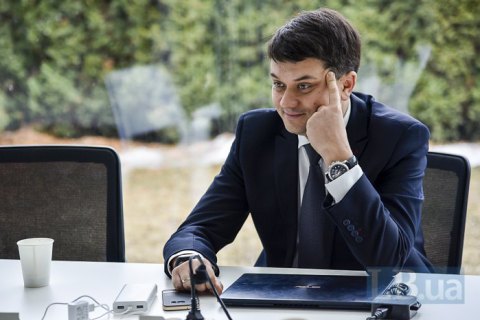 Volodymyr Zelenskyy’s team is not going to negotiate with the self-proclaimed Luhansk and Donetsk people’s republics if he is elected president of Ukraine, a representative of Zelenskyy’s HQ, Dmytro Razumkov, has said in an interview with BBC Ukrainian.

“We are certainly not holding such negotiations. Negotiations should be held or pressure should be put on those who make decisions. The so-called DPR and LPR administrations are not subjects of the negotiating process, but mere objects. All the key decisions are taken in the Russian Federation. These are talking heads who come to Minsk, make public some theses but have no say in decision-making. Therefore negotiations with them are ineffective, to put it mildly,” Razumkov said.

He said that the DPR and LPR are terrorist organizations and “there is relevant international practice”.

He also cast doubt on the effectiveness of Viktor Medvedchuk’s involvement in the Minsk talks. He added that Zelenskyy’s team is not in talks on any cooperation with Medvedchuk.