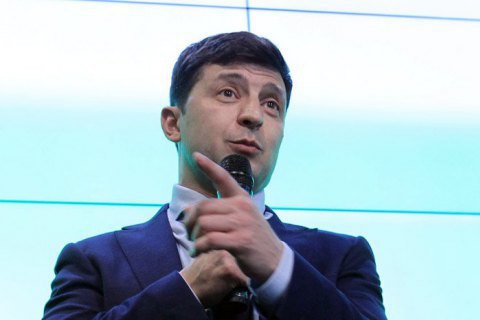 Presidential election frontrunner Volodymyr Zelenskyy has called on President Petro Poroshenko to carry out his duties and promises instead of "running after him" from TV channel to channel, giving medical samples and performing at the stadium.

"I want to appeal to a man who occupies a very serious post - the post of the president of Ukraine. Mr. Poroshenko, I really want you to move beyond slogans to meaningful action. Namely, imprison the murderers of Kateryna Handzyuk, the Svynarchuks and remember that you have forgotten about our captured sailors, who are behind bars now and waiting for you while you are running from [TV] channel to channel looking for Zelenskyy, giving medical samples and shouting at the stadium," Zelensky said in a video message on Facebook

"Please do it. This is your concern that a showman can become president, but the president who became a showman is a shame. The debate is on 19 April, duties are every day," Zelenskyy said.