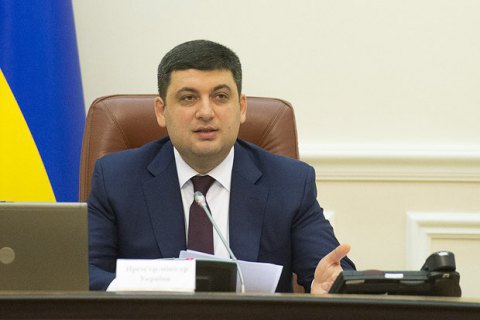 Prime Minister Volodymyr Groysman has said he has no intention to initiate the resignation of the head of the Transcarpathian regional state administration, Hennadiy Moskal, who earlier in the day suggested that Groysman should raise this issue with the president.

Groysman said in a Facebook exchange with Moskal on 6 May that his government is determined to fight smuggling in general and that of timber in particular, and asked the Security Service of Ukraine (SBU) and the Anticorruption Bureau to check the facts presented in Moskal's statement.

He also spoke against Moskal's resignation, saying there was a lot of work to be done and that he hoped that they would “do it together”.

“Let us set up a new tradition of appointing senior cadres in the customs service on the basis of public competition with participation of NGOs. Let this tradition begin with the Transcarpathian customs," Groysman suggested.

He also said he planned to visit Lviv Region where, among other things, he intended to discuss the problem of smuggling with the Lviv customs office.

Groysman invited Moskal along with the leadership of the Transcarpathian customs to come and meet in the capital next week.