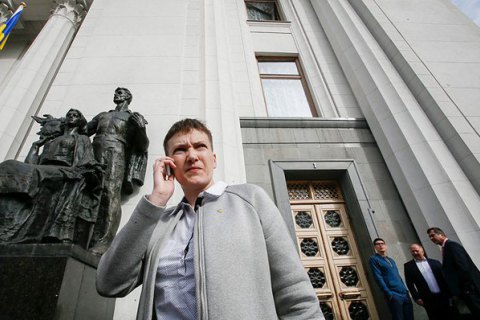 MP Nadiya Savchenko wants to join negotiations on the release of Ukrainians held captive by Donetsk and Luhansk separatists.

She was speaking at a news conference following her trip to eastern Ukraine, according to the press service of her Fatherland party.

In her opinion, there are three platforms for negotiations on the release of prisoners.

"The first is at the state-to-state level, these are negotiations between the presidents. That is the level at which our guys who are political prisoners should be released. The second platform is at the level of legislative bodies in Ukraine, the Security Service of Ukraine [SBU], and newly-creaed judicial bodies in occupied territories. The third platform is the release of guys, who are kept in cellars, as a result of a hot fight. I cannot speak at the presidential or interstate level but as MP, I am ready to speak at other two levels," she said.

Commenting on her yesterday's interview with Radio Era, she said she was not scared of what she said despite journalists' interpretations. On the radio, she suggested that direct negotiations with the self-proclaimed separatist Donetsk and Luhansk republics should be held.

Savchenko insists Ukraine is fighting against Russia in Donbas.