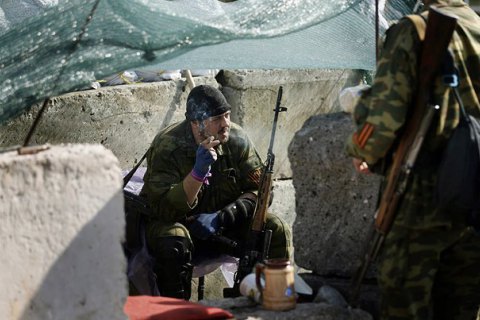 Over the past day, the Russia-backed militants in Donbas 64 times opened fire at the positions of the antiterrorist forces, the ATO press center reported via Facebook on 18 July.

Most of the attacks (40) were recorded in the Donetsk sector. The militants used 120- and 82-mm mortars, rocket-propelled grenades and heavy machine guns, banned under Minsk agreements, at the Ukrainian army positions in Avdiyivka, Zaitsevo, Mayorske. Near Dacha, they used 120-mm mortars, and 82 mm mortars at Verhnyotoretske.

In the Mariupol sector, 17 counts of ceasefire violation were reported. In Starohnativka, Shyrokyne, Novoselivka and Hnutove, the militants used 120-mm mortars to shell the strongholds of Ukrainian troops. Near Pavlopil, terrorists used 82 mm mortars, and armored personnel carrier weaponry outside Mariyinka, where also worked an enemy sniper.

On Sunday, a civilian resident of Avdiyivka received shrapnel wound as the militants shelled the city.