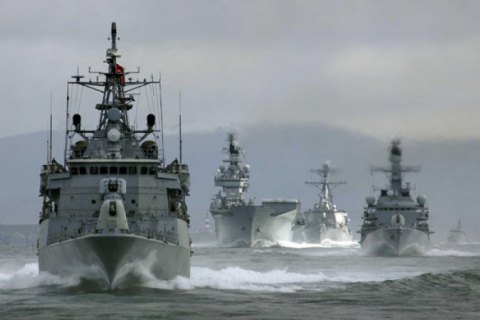 The drills will be located in the northwest part of the Black Sea, adjacent to Odesa and Mykolaiv regions, and will last until July 30, the press center of the Command of the Ukrainian Navy has said as quoted by Interfax-Ukraine

The marine component involves more than 25 ships, boats and supply vessels from Ukraine, the United States, Turkey, and Romania. According to the schedule of the exercise, the shore component will be larger than in previous years, and its task will be to work out the interaction of a multinational task force that will conduct an operation "in a crisis region" in keeping with NATO standards, with the participation of the Marines and special units of Ukraine, the U.S., Moldova, and Georgia.

The drills will also include sea and air landing in Odesa region, artillery engagement in anti-airborne defense, water obstacle traverse with the involvement of engineering departments, special efforts to ensure security in the maritime sector and air cover for the landing.

The total number of troops participating in the Sea Breeze will be up to 4,000 people from 16 countries – Ukraine, the U.S., Bulgaria, Great Britain, Georgia, Greece, Italy, Spain, Lithuania, Moldova, Norway, Poland, Romania, Turkey, Sweden, and Finland. The hardware will number 20 aircraft and helicopters, more than 140 units of trucks and armored vehicles.

Ukraine will be represented by its Navy and the State Border Service, as well as personnel of the Land Forces and the Air Force, and the National Guard of Ukraine, which will take part in the maneuvers.

The Ukrainian-U.S. Sea Breeze military exercise takes place every year since 1997 in accordance with the 1993 Memorandum of Understanding and Cooperation on Defense and Military Contacts between the U.S. Department of Defense and the Ministry of Defense of Ukraine. Their task is to train and build up combat readiness of the Ukrainian Navy on a bilateral basis, but the exercise is open to other countries.