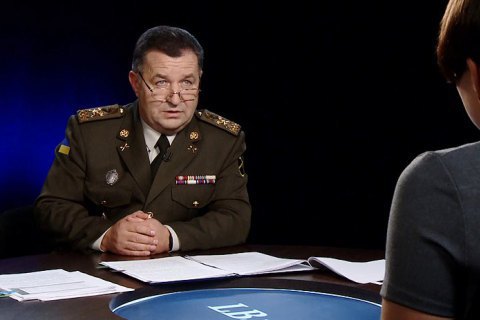 Ukraine spends 6 700 dollars a year to provide one militarywhereas in the US the figure is up to 500 thousand dollars, in the Baltic countries - 80 thousand, in Poland - 90 thousand.

"If you take the [Ministry of Defense] budget - In the past year that we've got 49 billion out OF the 55 billion available. It turns out that Ukraine annually spends $ 6,700 per one military," Defense Minister Stepan Poltorak said in an interview on "Left Bank with Sonya Koshkina."

"For that money you need to buy him a uniform that would not burn or get wet, provide him with weapons and equipment, feed him, provide social security and medical care. It is hard to do, but that's what the Ministry of Defence is about."

The minister admitted that the defence budget is too small for a full and comprehensive reform, but the state can give what it has.

"We should clearly understand that the state is giving us the money that it has. To say that we have enough money would not be true. However, in comparison with the years when the army received 0.5-1% of GDP, the current 2.5 % seems like a whole lot of money," Poltorak said

"During the local wars after the second World war, defence budgets [in relation to GDP] in different countries ranged from 4 to 28%, like in Israel," the minister noted.

In the meantime, funding for Ukrainian Army in the next year will make 2.5% of the nation's GDP (in general, the financing of the power agencies is planned at 5% of GDP), or 64 billion hryvnia instead of the requested 86 billion. In addition, this year the Ministry of Defense will receive 3.6 billion of the 7 billion hryvnya allocated to law enforcement agencies, that will be directed to the payment od salaries for contract soldiers.