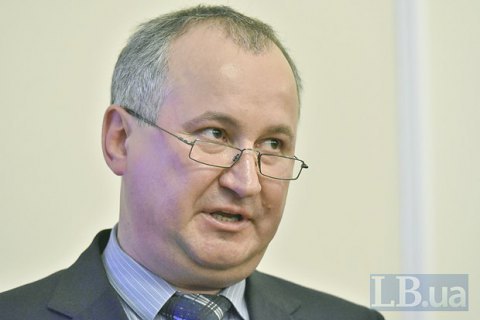 The head of the Security Service of Ukraine (SBU) Vasyl Hrytsak made public the details of the detention of two Crimean military on the Chongar border crossing point.

He said the detention was a part of special Intelligence operation.

"Our counterintelligence conducted an operation, during which two former Ukrainian soldiers were arrested. After the annexation of Crimea they have betrayed the oath of allegiance to the Ukrainian people, and defected to the enemy side. Their names are Aleksandr Baranov and Maksim Odintsov, they served in the 10th Navy Aviation Brigade of Ukraine. When the Ukrainian brigade was stormed on 22 March, 2014, some soldiers chose to serve in the Ukrainian army while others opted to remain in Crimea. On the fact of desertion and treason, criminal proceedings have been launched," Hrytsak told reporters at a briefing on 22 November.

The detention took place on the border crossing Chongar, located at the administrative border with the annexed Crimea, where the two came to receive from a courier the certificates on higher education that they needed to get promoted to officers in the Russian army.

A court in the city of Mykolaiv ordered their arrest with the right to be released on bail.

On Monday, 21 November, Russia's Defense Ministry said that two Russian soldiers were "illegally detained and spirited out of Crimea.

The Security Service of Ukraine, in turn, said that two deserters, who after the annexation of Crimea went to serve in the Russian army, were detained on the border with the peninsula.