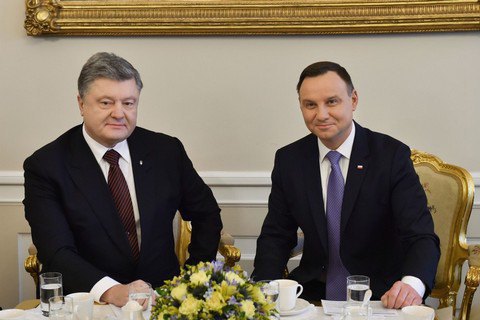 Ukraine and Poland have decided to create an institute of good neighbourliness, aimed to create "a real atmosphere of reconciliation and historical truth," the President of Poland Andrzej Duda told reporters in Warsaw on 2 December.

President Petro Poroshenko, who is on an official visit to Poland, in turn, said that the will help to ease political controversies around history.

"We agreed to coordinate actions in order to bring our nations closer and restore the historical truth. We agreed that it is the business of historians rather than politicians. It is very important to move further on," he said.

Poroshenko stressed that Poland is not just a strategic partner but a friend of Ukraine.

Poland's Sejm (lower house of parliament) on 22 July adopted a resolution recognizing the Volyn Tragedy as genocide. In accordance with the resolution Poland will celebrate 11 July as the Day of Remembrance of the victims of genocide arguably committed by Ukrainian nationalists against the citizens of the Second Polish Republic.