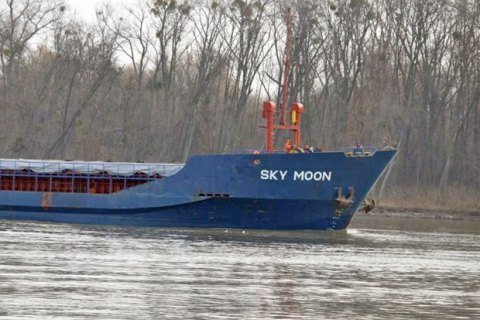 Ukrainian border guards in Odesa Region have detained a cargo ship flying Tanzanian flag that illegally called at the port of Crimea.

"On November 30, a border guard boat spotted in the internal waters of the Ukrainian part of the Danube River a cargo ship Sky Moon (Tanzania flag) with nine crew members (captain of the ship, a citizen of Libya, and eight Syrian crew members) which, according to the State Enterprise Administration of Ukrainian Sea Ports and the Ministry of Infrastructure has illegally called in a temporarily closed seaport in the Autonomous Republic of Crimea," the State Border Service website reported on 1 December.

The vessel did not return calls and the guards stopped it.

The visits of Sky Moon in Crimea are evidenced from entries in the vessel papers and navigation devises, as well as the entry/exit marks of the Russian Federation border agency in Crimea in the passports of all crew members.

Protocols on an administrative offence were drawn with respect to the captain and crew members.

The border guards note that during the escort of the ship to the port of Reni, the Sky Moon captain made a dangerous maneuver, intending to put the vessel on a bank in the Romanian part of the Danube. This attempt was prevented.

The reports on administrative violations are submitted to a district court of Reni.

The Sky Moon carried a cargo of three thousand tons of soda ash.

In more than two years since the annexation of Crimea by Russia, Ukrainian law enforcers have detained only four vessels that have illegally called into Crimean ports. It is estimated that the seaports of the peninsula have since been visited by over 600 boats, including 260 foreign merchant ships, an LB.ua article reads. At the same time, Ukrainian law enforcers do not always detain in Ukrainian ports the vessels that have illegally visited Crimea.