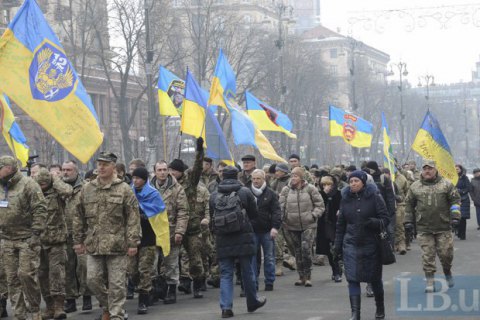 Around 400 antiterrorist operation veterans, who took part in the Debaltseve battles exactly two years ago, and their relatives walked through central Kyiv to remember the battle and its participants, an LB.ua correspondent has reported.

They walked from the Kyiv city administration to Independence Square and then to St Sophia Square where a music concert was held.

In the Debaltseve area, Ukrainian troops faced the overwhelming number of heavily armed Russian and militant forces. The regular units of the Russian armed forces were represented by eight battalions of rocket and cannon-launched artillery, eight battalion tactical groups clustered in temporarily occupied areas of Ukraine near Debaltseve.