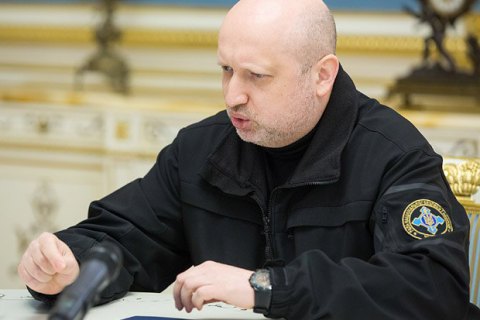 Ukraine needs to wrap up the anti-terrorist operation (ATO) in Donbas and move on to a new format of protecting the country from the hybrid war with Russia, says National Security and Defense Council Secretary Oleksandr Turchynov. "The warfare in the east of our country has been going on for three years now and has outgrown the ATO format both in terms of the duration and the scale," Turchynov said in an exclusive interview with Interfax-Ukraine, published on 13 June.

"The Anti-Terrorist Operation fulfilled many important tasks. It was within the ATO framework that we stopped the aggressor, conducted presidential, parliamentary and local elections, and also liberated a significant part of the occupied territory of Ukraine... However, it's time to move on to a new format of the country's defense."

Turchynov reminded that the current Ukrainian legislation provides for two main cases in which the combat use of the Armed Forces is authorized – these are a declaration of war and an anti-terrorist operation.

"Despite the widespread opinion, under our legislation, the imposition of a martial law suggests only the existence of a special legal regime in the country or in certain regions and does not provide for an automatic right to use the army and other military formations," the NSDC secretary said.

The legislation was formed based on the 20th century ideas about a classical warfare and does not take into account the need to resist the hybrid aggression that Russia is waging against Ukraine.

It's time to work out a new format that will effectively protect Ukraine from the hybrid methods of war used by Russia, Turchynov said.

"It's time not only to recognize some areas of Donetsk and Luhansk regions as occupied, but to legislate on the state policy for their liberation. An effective technology of protecting the country is needed. To this end, it is necessary to give the president the right to use the army and other military formations against the hybrid aggression by Russia," the NSDC secretary went on to say.

According to Turchynov, Ukraine should create an operational headquarters permanently working in the hostilities zone, with broad powers for the integrated management of the army, all law-enforcement structures and civil and military administrations.

"This will only strengthen the foundation of the Minsk agreements, since their implementation is impossible without resolving security issues and without liberating the occupied Ukrainian territory," the NSDC secretary stressed.

"This is a very serious issue that requires professional expert discussion. The amended bill on the restoration of Ukraine's state sovereignty over the temporarily occupied territories of Donetsk and Luhansk regions will be presented to the president, after which I hope it will be promptly introduced to the Verkhovna Rada," Turchynov concluded.