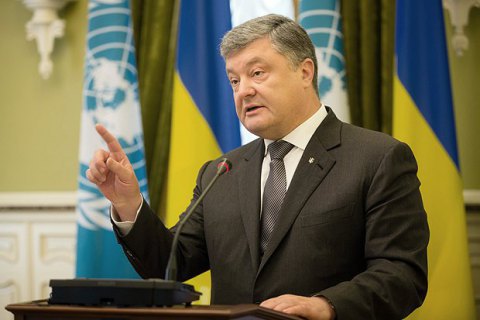 President Petro Poroshenko considers any pressure on the media unacceptable.

"Any pressure on the media, especially their blocking is unacceptable. Equally unacceptable are attempts to justify the actions of the country - aggressor against Ukraine, playing in the hand of Russian propaganda, including on issues like the assessment of the Revolution of Dignity", the president wrote on Facebook Monday, commenting on the situation with the blocking of the channel NewsOne in Kyiv.

The president also noted that such actions may be a reaction to the inaction of watchdog agencies that must react quickly.

On 3 December, protesters blocked the entrance to the office of TV channel NewsOne in Kyiv by barricading the gates with sandbags and barbed wire. Protesters said the NewsOne owner MP Yevheniy Murayev should apologize for calling the Dignity Revolution a coup.

On Monday, Interior Minister Arsen Avakov called on the protesters to stop the blocking of the TV channel and said that the police will take action within its jurisdiction.

The National Police did not found any violations in the actions of picketers.