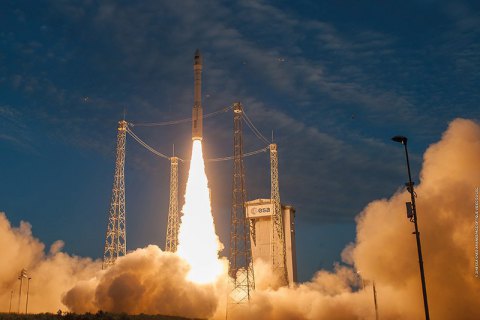 Arianespace’s lightweight Vega rocket has deployed the European Space Agency’s Aeolus climate science satellite in a launch from the Centre Spatial Guyanais at Kourou, French Guiana. It is equipped with the RD-843 engine manufactured by Dnipro-based Pivdenmash, the State Space Agency of Ukraine has said.

Aeolus, also known as the Atmospheric Dynamics Mission (ADM) or ADM-Aeolus, is part of the European Space Agency’s (ESA’s) Earth Explorers programme which will also contribute to the World Meteorological Organization’s Global Observing System (GOS). Equipped with a Doppler lidar instrument, Aeolus will build a profile of winds in the Earth’s atmosphere below 20 km (12 miles, 11 nautical miles): a range of altitudes covering the troposphere and the lower reaches of the stratosphere, NASA said.

The Aeolus satellite was constructed by Airbus Defence and Space. Its design is derived from a platform originally developed for the Mars Express spacecraft, which has been orbiting the red planet for over fourteen years. Aeolus will have a mass at launch of 1,357 kg (2,992 lb) and is designed for a three-year operational lifespan.

Aeolus is three-axis stabilized and will operate in a low circular sun-synchronous orbit – at an altitude of 320 km (199 miles, 173 nautical miles) and an inclination of 96.7 degrees to the equator.