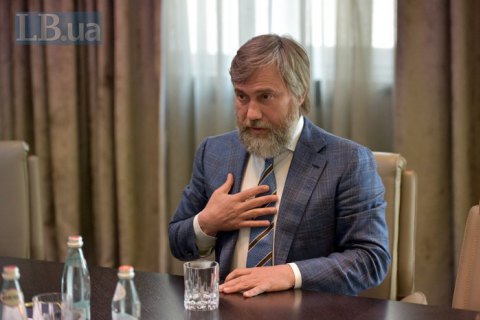 MP Vadym Novinskyy has confirmed exclusively to LB.ua that Opposition Bloc, the successor to Viktor Yanukovych’s Party of Regions, is in talks on a merger with Vadym Rabinovych’s For Life party.

He was commenting on an earlier statement to this effect by another Opposition Bloc member Serhiy Lyovochkin.

“Indeed, such consultations have been going on for two months. We are not discussing now any possible common party list or a possible single candidate in elections and so on. We are discussing what is most important, values. The values of peace and economic development – something that is important to all of us and based on what all sane forces of the country, not just Opposition Bloc and For Life, should cooperate,” Novinskyy said.

He added that while consultations are underway, it is up to the party’s congress to have the final say.

“At this stage, we are talking about principles. Mostly with Rabinovych. And a little with Murayev. I have not talked to Medvdechuk for a long while, only a few brief calls, a couple of them literally, recently,” he said.