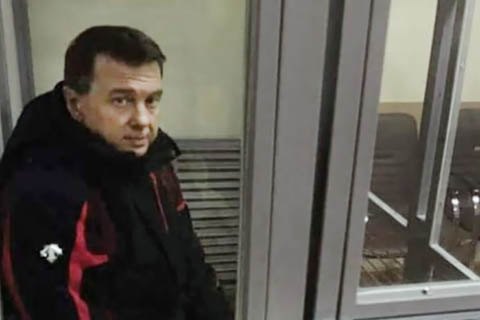 The Security Service of Ukraine (SBU) has said a former husband of Ukrainian Olympic gymnast Lilia Podkopayeva, Tymofiy Nahornyy, was recruited by the Russian FSB to establish a pro-Russian party.

The head of the SBU's Kyiv department, Oleh Valendyuk, held a briefing today where he played a surveillance video clip showing Nahornyy talking about the tasks assigned by his recruiters. The video was allegedly recorded on 25 September 2018.

According to the SBU, the FSB recruited Nahornyy back in 2014 when he was detained on Peace March in Moscow. On the video, he can be seen talking about his meetings in the Russian presidential administration, the State Duma and FSB.

The political force which he was to set up was to promote Ukraine's non-bloc status and a state status for the Russian language.

Nahornyy was detained in Kyiv on 2 October on suspicion of state treason and fraud.

Later on 22 October, the SBU press service said that it had learnt about Nahornyy's dealings from a Russian businessman temporarily staying in Ukraine. The businessman moved to Canada because of a criminal case against him in Russia.

In early September, he allegedly informed the SBU that several "mediators" contacted him in Kyiv and offered to make sure that the criminal case against him and his parents in Russia gets closed in exchange for money.