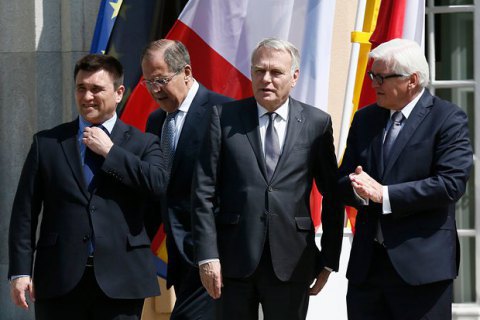 The meeting of the foreign ministers in the so-called Normandy Four format (Germany, Russia, France and Ukraine) ended in Berlin on 11 May.

Russian Foreign Minister Sergey Lavrov was the first to talk to journalists after the meeting. He said Russia rejected the deployment of an armed OSCE mission in Donbas with a view to local elections, although earlier Russian President Vladimir Putin supported this idea.

"Ukrainian colleagues want some kind of a paramilitary mission. They explain the need for it by saying that otherwise the election campaign cannot be free. In my opinion, this is a made-up problem. We believe that it is quite possible to ensure security during the elections without any paramilitary structures," Lavrov said.

He recalled that amnesty to separatists was a precondition to the holding of elections, but added that Russia’s demands found no support in Ukraine. Among other conditions, the minister said that Ukraine should adopt the law on elections in Donbas and ensure a special status for the separatist-held areas in the Constitution of Ukraine.

Lavrov said a number of agreements on security were reached at the negotiations, which will be submitted for consideration by the trilateral contact group on a Donbas settlement.

The minister agreed that the talks touched upon the prisoner exchange subject but refused to elaborate.

Earlier, President of Ukraine Petro Poroshenko called the dispatch of an OSCE police mission as one of the key conditions to holding elections in Donbas.

Ukraine has asked the OSCE to set up armed posts on the border with the Russian Federation. After that, Russia-backed militants threatened Ukraine with a "full-scale war, in which the West will be drawn into."

Nevertheless, Russian President Vladimir Putin said that Russia approved of Ukraine's initiative to have an OSCE police mission in Donbas, but only along the line of contact, not on the border between Ukraine and Russia.

Germany, who holds presidency in the OSCE, has not supported the idea of an armed OSCE police mission in Ukraine.