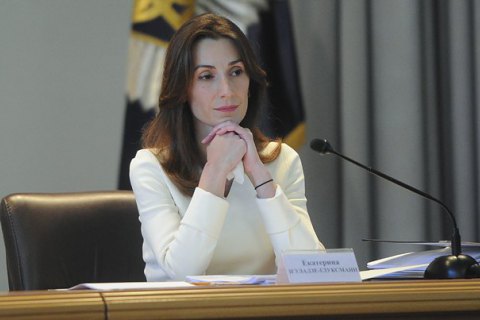 He said Zguladze would make an official statement later. "Eka Zguladze accepted my proposal and will continue to work for the Interior Ministry reform squad, leading the group of advisers. We have a lot of work to do!" the minister added.

Eka Zguladze, then 27, became the first deputy interior minister under Georgian President Mikheil Saakashvili in May 2006. After minister Bachana Akhalaia resigned in response to an inmate abuse scandal, Zguladze was appointed acting minister and held the post until the opposition coalition Georgian Dream won the parliamentary election and formed a new government in October 2012.

In December 2014, Zguladze was granted Ukrainian citizenship and the cabinet appointed her first deputy interior minister.

On 20 April, several media outlets reported that Zguladze resigned. However, later the head of the National Police, Khatia Dekanoidze, dismissed the reports. In November 2015, Arsen Avakov also denied that Zguladze planned to resign.