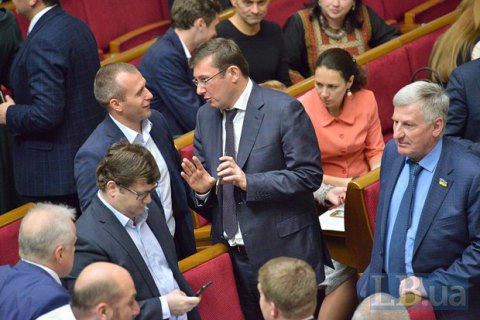 Ukraine's Verkhovna Rada on Thursday, 12 May put on the agenda and passed bill No 4645, which allows the head of the Petro Poroshenko Bloc (PPB) faction, Yuriy Lutsenko, to be appointed prosecutor-general.

The document in fact duplicates the main provisions of bill №4469, voted down and rejected on Wednesday. The new bill, however, has a number of provisions pertaining to the State Bureau of Investigation, absent from the previous bill.

These additions allowed the Committee on Legislative Support for Law Enforcement on Wednesday to review the document and recommend it for adoption.

The bill, just as the draft rejected on Tuesday, is considered to be tailored for the head of the PPB faction, Yuriy Lutsenko, whom the president wants to see as the new prosecutor-general. Lutsenko has neither job experience with the prosecution agencies nor law education, but is a seasoned lawmaker and former interior minister.

According to the Verkhovna Rada Rules of Procedure, a bill that has been rejected or in fact repeats a rejected piece of legislation, cannot be reviewed during the same session.