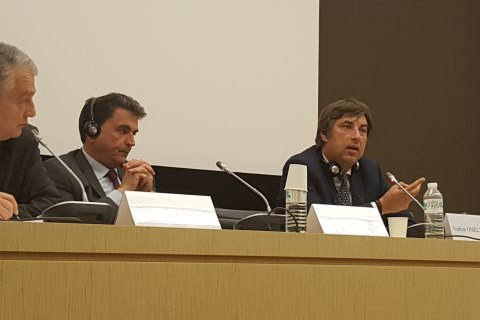 A delegation of Gorshenin Institute visited Paris where it held a series of meetings and took part in the symposium "Ukraine, out of the war", which was held in the National Assembly of France and organized by the France-Ukraine Parliamentary Friendship Group with the participation of the Robert Schuman Foundation, the Centre for Analysis of Foreign Policy and the Strategic Research Fund.

When asked about the possibility of Ukraine strengthening ties with the European Union, Gorshenin Institute President Vadym Omelchenko said he was confident that were a referendum held not in the UK but in Ukraine, the Ukrainians would have voted for the EU.

"By favouring closer ties with the EU, the Ukrainians would have chosen not economic preferences, access to the market or geopolitical priorities. The agendas of both Ukrainian revolutions were to protect the right to choose. If we get it right, this is a core value of European democracies. Ukrainians showed they were willing to sacrifice and risk many things, including their lives. If these values are important to Europe, we're on the right track," Omelchenko said.

While making this choice, the biggest obstacle that Ukraine faced was the fact that of all the former Soviet republics, it had the closest ties with the Russian Federation.

"Russia is creating serious obstacles on Ukraine's path towards global transformations. There are two main reasons for Moscow to do this. First, the strengthening of democratic institutions in Ukraine, first of all freedom of choice, creates an important precedent and a challenge to Russia's internal political structure," said the president of Gorshenin Institute.

"Second, Ukrainian President Leonid Kuchma, who really knew Russia very well, once observed that any Russian leader's main phobia is NATO at Russia's borders. That is why Russia will involve huge resources, from the military to lobbying and information, to curb Ukraine's convergence with the West in any form and at any direction."

Vadym Omelchenko stressed that Gorshenin Institute always considers answers to such questions in a global context.

"You should take into account the major changes that occur in the mentality of the Western world or, to be more specific, the revival of National Socialism and hence – isolationism," he concluded.