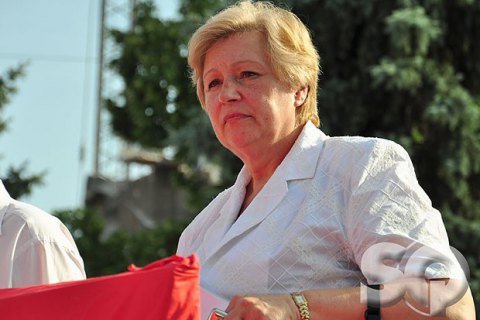 The SBU on 28 June searched the house of a Communist leader, former MP Alla Aleksandrova, who lives in Kharkiv.

Later, the press service of the Communist Party said that Aleksandrova was detained and taken to the building of the Kharkiv headquarters of the SBU. She was charged with encroachment on the territorial integrity of Ukraine and bribing of an official.

The press service of the SBU stated that Aleksandrova and her son, who is now hiding in Russia, attempted to bribe the leadership and deputies of local councils of Kharkiv Region so that they appeal to parliament and the president with regard to the constitutional amendments on federalization.

"The Communists offered 9,000 dollars per signature under the document. Meanwhile, according to operative data, the Russian security service FSB has allocated much larger sums to bribe deputies, but the Communists appropriated a significant part of the money," SBU release says.

Aleksandrova has been a long-time first secretary of the Kharkiv regional committee of the Communist Party. She was a four-time member of the Ukrainian parliament (1998-2012).

After the ban of the Communist Party last year, Aleksandrova created and headed the movement Za Slobozhanshchynu with separatist overtones and campaigned for the creation of a namesake "special development region".

In November 2015, the Kharkiv regional prosecutor's office reported on the opening of criminal proceedings against Aleksandrova's movement on charges of encroachment on the territorial integrity of Ukraine.