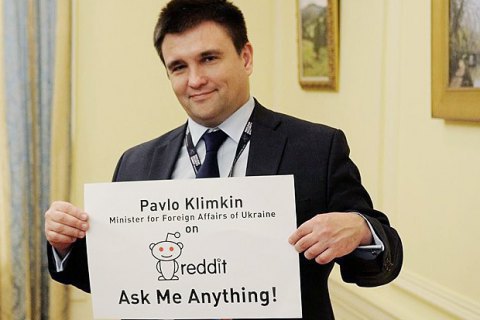 Ukrainian Foreign Minister Klimkin calls on the Dutch to ask him questions about the referendum
Photo: Photo: twitter.com/PavloKlimkin

Ukraine is not going to discuss changes in the Association Agreement between the EU and Ukraine, the Foreign Minister of Ukraine Pavlo Klimkin said on June 29 in an exclusive interview to LB.ua.

Klimkin's comments came on the hills of the request of the Prime Minister of the Netherlands Mark Rutte, who said that the EU leaders must give the Netherlands "legally binding" guarantees that the concerns of his country regarding the EU-Ukraine Agreement will be considered.

"Such changes cannot be made without our consent and the consent of all EU member states," Klimkin said.

The minister warned that while there is a "theoretical possibility" of such changes "we have something to offer, too, because Ukraine has come a long way over the past few years."

"Another thing is an interpretative statement. If someone wants to offer their own interpretation of the Agreement provisions, especially when this is required by domestic political considerations. Such an option is not the best for the European unity, but still an option. The main thing is that such interpretations should not conflict with the spirit and content of the Agreement, "- Klimkin said.

The minister admitted hid "did not envy the government of the Netherlands."

"They found themselves in a complex situation, in a way in an ambiguous position. It was the first time in the history of the country that they held such a referendum, which was made possible by the legislation that took effect only a year ago. In addition, the referendum was held after the ratification of the agreement by the Netherland parliament, elected by all citizens of this country, while in the referendum, less than 20% of voters said 'no'," Klimkin said.

The minister also stressed that the referendum was not so much about the Association Agreement with Ukraine about the attitude towards Europe and its problems, which, directly or indirectly, is recognized by all.