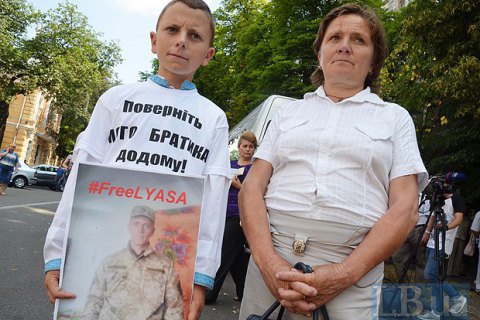 Children and relatives of the Ukrainian military that are held captive by the Donbas militants called on President Petro Poroshenko to facilitate the release of their dear ones, LB.ua correspondent reported from outside the Presidential Administration

A few dozen people rallied on 30 June in front of the Presidential Administration on Bankova St. in the downtown Kyiv.

According to Iryna Herashchenko, the vice-speaker of the parliament and the presidential envoy for the peaceful settlement of the Donbas conflict, at least 113 Ukrainian prisoners are being illegally imprisoned in Donetsk and Luhansk regions, and Russia.

Some of the prisoners are waiting for the release for two years.

"In the last few months, the release has actually been blocked. Since the winter, the Ukrainian party announces exchange of prisoners in the format of "25 to 50". But it does not happen. At the same time, the militants are trying to link the issue of releasing the hostages to a general amnesty to members of illegal armed groups. They keep repeating that at the talks in Minsk," the organizers told LB.ua reporter.

"It is very important to maintain pressure on the international community, by reminding the leaders of partner countries in the EU and the US, that in the center of Europe, in Ukraine, pro-Russian militants and Russian military hold over a hundred Ukrainian citizens, patriots of their country, who defended their homeland."