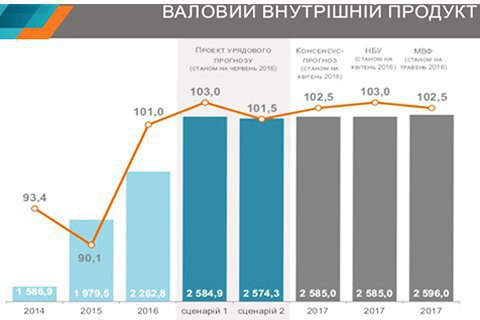 The forecast of economic and social development of Ukraine for 2017 envisages the growth of GDP at 3%, subject to successful economic reforms, Vice-Premier and Economy Minister Stepan Kubiv told a Cabinet meeting on 1 July.

The pessimistic scenario suggests an increase of 1.5%.

In the next two years, the GDP growth will average 4% on a more optimistic scenario, or 2% in the pessimistic case.

The Ministry of Economy warned that the main risks to the economic development of Ukraine might be an aggravation in the war in Donbas, a fall in the world commodity prices, an increased in trade restrictions by Russia, devaluation of the hryvnia and inflation, or Ukraine's failure to obtain the planned financing from the IMF.

The economy ministry will recommend to rely on the better scenario during the preparation of 2017 budget.