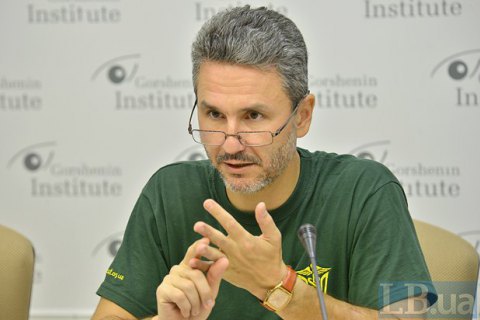 The doctors of the Pyrohov First Volunteer Mobile Hospital returned to the forefront as the Ministry of Defence has agreed to officially involve them into the antiterrorist operation, a co-founder and head of the hospital, Hennadiy Druzenko, stated at a 2 September press conference at Gorshenin Institute.

He said that just in days after the previous press conference the Commander in Chief of the Armed Forces of Ukraine Muzhenko submitted a joint report to Defence Minister Poltorak, which outlined a mechanism of attraction of volunteer doctors.

"The report was approved by the minister, and today we have a document that outlines a clear algorithm: how to attract physicians, who should issue an order to attract them to the ATO etc," Druzenko said.

He said he hoped that this decision would not be sabotaged at lower levels.

Druzenko said that the August rotation of volunteer doctors has provided assistance to 658 patients in Donbass, including 63 soldiers. Starting September, the Pyrohov hospital will provide medical care to the military in the Mariupol sector of the antiterrorist operation in Donbas.

"The military doctors has requested us to expand our presence in the hospitals of the cities of Shchastya and Stanytsya Luhanska. Provided the army fulfils its obligations, we cover these two important areas to the east of Ukraine as well," the doctor said.

The Pyrohov First Volunteer Mobile Hospital is a volunteer project where doctors from different cities of Ukraine are going to work in the ATO zone. The hospital began its work in December 2014 in the city Kurakhove. Currently, doctors are rendering medical care to the military and civil population in Luhansk region, in close proximity to front lines.

The project brings together doctors who are trained to tactical medical standards.