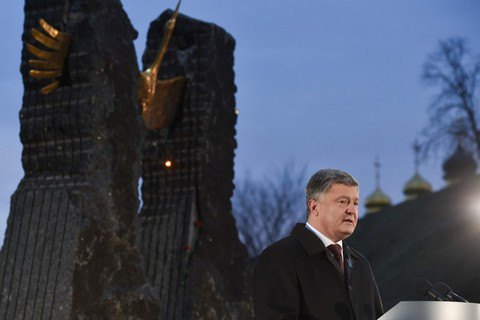 President Petro Poroshenko has instructed the Foreign Ministry to step up efforts aimed at international recognition of the 1932-1933 Holodomor (Great Famine) as an act of genocide against the Ukrainian people.

He made this statement during the Holodomor commemorative events in Kyiv on 26 November.

In 2006, the Ukrainian parliament recognized the Holodomor as an act of genocide against the Ukrainian people, which killed from 3 million to 7 million people, according to various estimates.

"Those who staunchly deny the Holodomor are mostly clustered in one geographic location. They keep archive documents a secret and use courts to ban relevant studies by Ukrainian authors. The long-suffering Ukrainian Library in Moscow can certainly be purged of books about the Holodomor. But you cannot erase the Holodomor from history!" the president said.

He stressed that the only guarantee of Ukraine's independence now is the unshakeable unity of the Ukrainian nation.