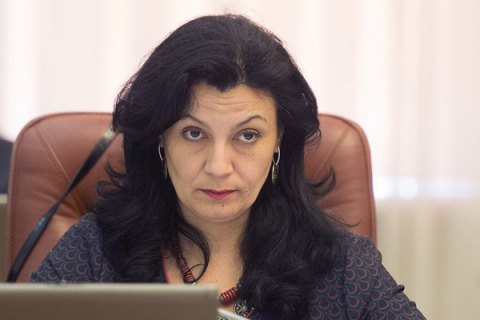 The United States do not reduce, but rather extend financial assistance to Ukraine, Vice Prime Minister for European and Euro-Atlantic Integration Ivanna Klympush-Tsintsadze wrote 7 December on Facebook.

"I do not understand what kind of 30% cut in military aid to Ukraine Mr. Nalyvaychenko is talking about in his interviews and why he is doing this. My today's meeting in the Pentagon and Congress say the opposite - namely, an increase in comparison with 2016 year funding for military cooperation with Ukraine by at least 50m to 350m dollars. This resolution has been voted by the House of Representatives and must be supported by the Senate," she wrote.

As reported before, the leader of the Justice movement Valentyn Nalyvaychenko, who is in the USA to meet with the transition team of President-elect Donald Trump, said that members of the Senate and the House of Representatives demand that the president and the prime minister prosecute those plundering the budget, and thus harm the national security of Ukraine.

However, the politician says, "the level and size of aid can be preserved if Ukraine joins the global anticorruption coalition, investigates the facts of political corruption and offshore scandals, and brings those responsible to justice."

Nalyvaychenko is visiting the USA as a social and political activist. His visit will last for three days.

He is expected to meet the transition team of US President-elect Donald Trump, hold consultations in the Congress and meetings in the International Republican Institute (IRI), the Atlantic Council and with representatives of the US special services.