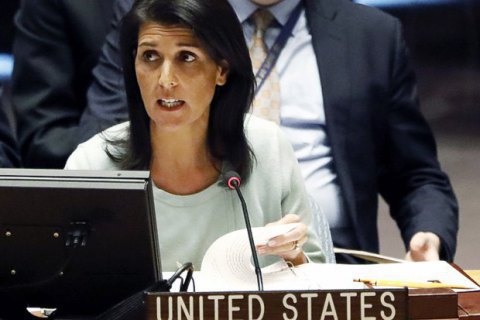 The international community perceived the statement by the new US ambassador to the UN, Nikki Haley, about the anti-Russian sanctions as the first clear signal of Donald Trump's administration regarding the White House policy on the Russian-Ukrainian conflict, says the article "Dangerous UN-diplomacy. How Churkin's incivility in the UN Security Council may play into Ukraine's hands", published on LB.ua on 6 February.

"The address by the newly appointed ambassador of the United States can be regarded as a landmark as it was the first public statement by a representative of the new US administration on the Ukrainian-Russian conflict and the aggression of the Russian Federation. The very fact of Haley's statement on the anti-Russian sanctions was perceived by the international community as the first clear signal of Donald Trump's administration to Russia on the US policy on the Russian-Ukrainian conflict," says the head of the LB.ua international department, Ihor Solovey.

He says that the USA's clear position in support of Ukraine in the Donbas conflict, the sanctions and Crimea has come as a big surprise to Russia and personally to its envoy to the UN, Vitaliy Churkin.

The sanctions imposed on Russia over the temporary occupation of Crimea will remain in place until Russia hands control of the peninsula back to Ukraine, she stressed.

"The statement of the US ambassador provides a tough response to Russia's attempts to 'test the US position' by the escalation in eastern Ukraine," Solovey quoted LB.ua's diplomatic sources as saying.

In his article he says that the US State Department planned to deliver the keynote speech outlining the new US administration's position on the events in eastern Ukraine at a meeting of the UN Security Council dedicated to conflicts in Europe. However, the escalation in Avdiyivka and Ukraine's effective efforts to convene a Security Council meeting prompted the USA to postpone the keynote address until 2 February.