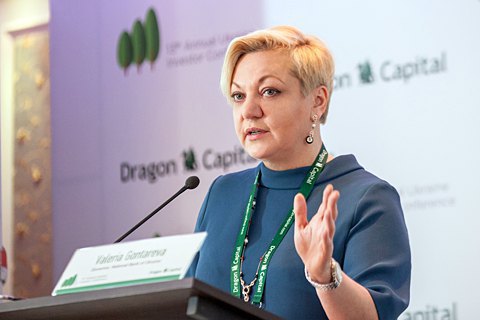 The governor of the National Bank of Ukraine (NBU), Valeriya Hontareva, has said she will step down on 10 May or earlier if parliament votes so. Other NBU board members are not going to resign, she said.

"From the outset, I stressed that I came to the National Bank to do reforms. For myself, I planned even a shorter term on this job, but I could not leave the reform of the banking system half way at such a critical time," Hontareva said at an unscheduled news conference on Monday, 10 April.

Hontareva recalled that she headed the central bank in 2014 when Ukraine's economy and the banking system were in shambles: "Huge macroeconomic imbalances, the exchange rate of the hryvnya tied to the dollar, an enormous fiscal dominance, a sick banking system and almost non-existent banking supervision."

The chief central banker continued the list of griefs of the nation's banking system at the time of her appointment to the post. "The enormous amounts of lending to related entities, a non-transparent ownership structure, ineffective procedures to combat money laundering. Politicians, ministers and the governor of the central bank have for 20 years turned the blind eye to these problems," she said.

The NBU head stressed that during her three-year tenure she managed to ensure macrofinancial stability in the country by adopting a flexible currency exchange policy.

"Politicians' desire to keep the hryvnya rate at all costs for their own interests had adversely affected macrofinancial indicators, and we finally got rid of this hindrance. Moderate fluctuations of the exchange rate are no longer perceived as the end of the world and do not stir panic," Hontareva said.

In addition, the transition to the policy of targeted inflation, an increase in foreign currency reserves to 16.7bn dollars, the purge of the banking system from insolvent lenders, the NBU's complete transformation were also on Hontareva's list of successful efforts.

"I believe my mission is complete. Reforms are in place," said Hontareva.

She hopes that her successor will be an independent person who will continue the course she started.

"Had all state agencies carried out reforms like the National Bank, our country would have been at a different level of development," she said.

Hontareva warned that, in her opinion, resistance to changes and reforms will only keep growing.

"We have to bear in mind that all our efforts will be in vain without an independent central bank. The consistency of the policy of the National Bank is critical to the entire financial system," she stressed.

The resignation of Hontareva has been rumoured almost immediately after her appointment in 2014. However, the head of the National Bank confirmed early this year that she intended to quit and was looking for a replacement.