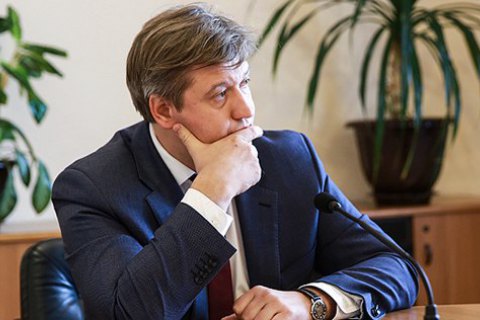 "I have received a negative response from the Kyiv tax authority to my objections to the tax audit report. This means that in the near future I will get a tax notice which is a straight way to a criminal case and signal for another smear campaign against me," the minister wrote on Facebook on Friday, 24 November.

He suggested that the attack was in response to the introduction of transparent VAT refund, the blocking of a corruption scheme with VAT bonds, the failure to increase the financing of the prosecutor's office, the reform of the fiscal service, his active position on the liquidation of the tax police and the creation of the Financial Investigation Service, the fight against fictitious VAT refund, particularly in Kyiv.

Danylyuk slammed the response of the fiscal service as incompetent and biased.

"My lawyers proved that the tax check was illegal because it covered a period beyond the one established by the law, and was warranted by an investigating judge who by law has no authority to rule on tax audits, etc." he wrote.

Danylyuk said that the decision on the tax check was forced from outside, in particular, from the Prosecutor-General's Office.

The minister warned that he was not going to tolerate pressure any longer.

"A stable Finance Ministry is key to the country's financial stability. I have tried not to make resonant moves in response to coordinated efforts to discredit myself, but there is a limit to my patience as well," Danylyuk concluded.