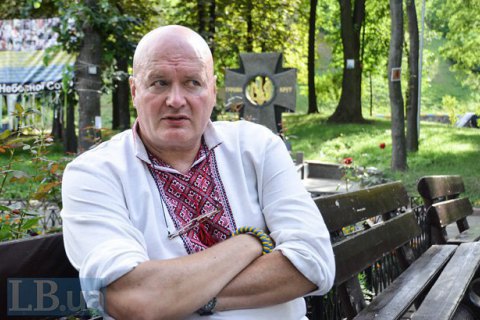 Camouflaged people detained the second commander of the National Guard battalion Donbas, Anatoliy Vynohrodskyy (call sign Gal), in Kyiv on 26 November, the battalion's first commander, MP Semen Semenchenko, has said on Facebook. Semenchenko is the leader of the Liberation Movement.

Vynohrodskyy was in charge of the so-called Staff for the Blockade of Trade with Occupiers and one of the organisers of the protest camp outside the Ukrainian parliament.

According to the police, Vynohrodskyy and another man were detained over the attack on a guard of a private farm in Berezhynka, Kirovohrad Region this summer. They were charged for armed assault (Article 187 Part 2 of the Criminal Code).

"Law enforcers have established that the mentioned citizens accompanied by other persons arrived at an agricultural enterprise at around 11.30 a.m. on 27 July. The criminals attacked the guard with brass knuckles and telescopic batons, having injured him. They also took his personal belongings, inflicting the damage of over 650,000 hryvnyas on him," police said.

Vynohrodskyy and his accomplice face up to 10 years in prison and property confiscation.

The Interior Ministry published Kalashnyk's testimony that he was abducted and tortured by Semenchenko's guards.