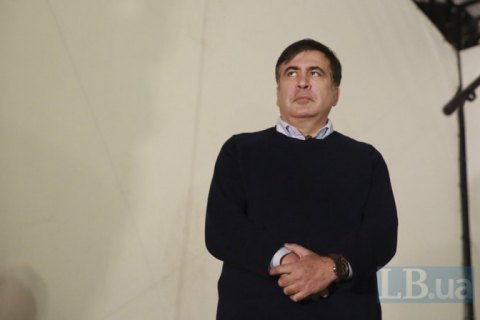 The leader of Ukraine's Movement of New Forces, Mikheil Saakashvili, and his colleague Yuriy Derevyanko have said that law enforcers detained several Georgians in Kyiv.

"Forty minutes ago, a Georgian journalist working for one of the most popular Georgian TV channels, who had accreditation and all documents for stay in Ukraine, was kidnapped from his home in Kyiv.He was handcuffed, they put a bag on his head and took somewhere," Saakashvili said on Facebook. He later tweeted that it was Tamaz Shavshishvili, a journalist working for Georgian Rustavi-2 TV.

According to Saakashvili, Shavshishvili's two friends were also detained.

Derevyanko said on Facebook that a Georgian volunteer fighter Vano Nadiradze, who allegedly took part in the antiterrorist operation in Donbas, was detained in central Kyiv and taken in an unknown direction. He added that earlier two Georgian journalists and a guard were kidnapped from a flat by unidentified persons.

Saakashvili's ally David Sakvarelidze said on Facebook that one of the detained is Zurab Tsyntsadze.

Two days ago Saakaashvili said that Shashvishvili's permit for permanent residence in Ukraine was cancelled.

He said that they were deport on an An-26 plane of the National Guard of Ukraine which took from Zhulyany airport at 5.15 p.m. It was to land in Tbilisi at 9.15 p.m.

The Security Service of Ukraine (SBU) specified they are citizens of Georgia.

They were involved in crimes, including extortion, car theft and burglaries. They were close to organized underworld crime bosses. They stayed in Ukraine illegally for a long time.

Their activities were found to be detrimental to Ukraine's national security.