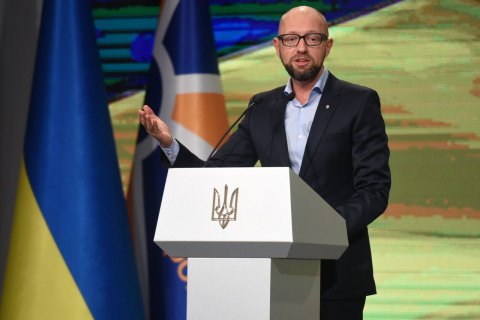 A merger of political forces is not on the agenda of the People's Front party, its leader Arseniy Yatsenyuk has said. He was answering an LB.ua correspondent's question about his party's plans to unite with the Petro Poroshenko Bloc.

"A merger of the political forces was not on today's agenda at all… Politically, we are united in the coalition, in the plan to change the country, in the plans to make Ukraine a member of the EU, NATO. I will be straightforward, can anyone do this but us? No! Do we have allies? Yes! Can we rely on someone else's efforts? No, only on ourselves. This is the role of the People's Front party. Yes, I know our rating today but I also know about the country's ratings which have been growing by all indicators in the recent years. Therefore we are united anyway, we are united for the future of our country," he said.

He was noncommittal when asked about the party's plans for the 2019 parliamentary election and his own presidential ambitions.

Earlier, a deputy head of the Petro Poroshenko Bloc, Serhiy Berezenko, said that his party is not going to unite with the People's Front.