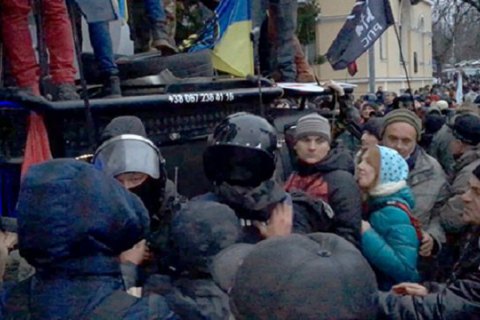 Thirty-two law enforcers, including 15 soldiers of the National Guard and 17 police officers, were hurt during clashes with Mikheil Saakashvili's supporters who were trying to seize the so-called October Palace in central Kyiv on 17 December.

The hurt law enforcers got poisoned with an unknown substance and hospitalized, some of them had bruises, according to the communications department of the National Police.

"During an attempt to enter the October palace, participants in the rally clashed with law enforcers. During a scuffle, they started spraying unknown irritating gas, hurled petards and bottles with water. They seized special means from some servicemen," the statement reads.

Three criminal cases were opened over the attempted seizure of the building and clashes with police.

"The situation in the capital is now quiet. Police continue their service in central Kyiv," the National Police said.

Following a peaceful march in central Kyiv, Mikheil Saakashvili's Movement of New Forces decided to use the October Palace as an HQ for its coordination council "so that they do not have to run from tent to tent".

When participants in the rally approached the building, it was encircled by the National Guard.

Clashes broke out, with Saakashvili's supporters throwing stones at law enforcers. Although Saakashvili called on his people not to use force, this had no effect on the crowd. Some of them managed to burst into a foyer of the October Palace when the Glenn Miller Orchestra was performing there.

Earlier, the Insider website reported quoting its sources that Saakashvili wrote a letter to President Petro Poroshenko on the ways of de-escalating the resistance. Allegedly, he also sent a message on words through an ambassador of an EU member state.

"Through an EU ambassador, he offers to stop marches and remove tents in exchange for 'de-escalation'," a source said.

Saakashvili reportedly softened his bellicose rhetoric under a threat of extradition to Georgia.

Foreign ambassadors to Ukraine have condemned an attempted seizure of the October Palace by Saakashvili's supporters.

"Attempts to seize and damage public buildings are an abuse of the right to peaceful protest," Canadian ambassador Roman Waschuk tweeted.

The US embassy in Kyiv on Twitter shared their opinion.