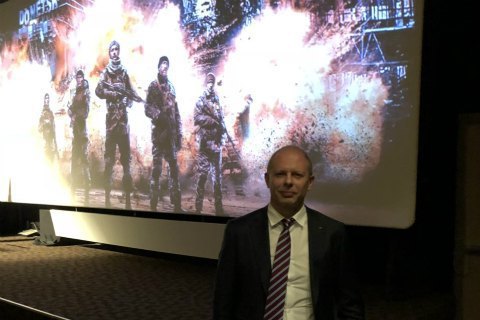 "The 'Cyborgs' film, which is inspired by the fate of the defenders of Donetsk airport, tells us not about the war, but about the peace that the Ukrainian nation wants to build and enjoy,” Klimkin said. The film by Ukrainian director Akhtem Seitablayev is based on a true story of the battle for Donetsk airport and tells about the history of modern-day Ukraine.

"Everyone should see the film to understand what makes Ukraine tick today. Therefore, I am extremely happy that I was involved in organizing this event in Jerusalem. The truth needs to be known!" Oleh Vyshnyakov, the honorary consul of Israel in Western Ukraine, said.

The photo project, "Ukraine: Overcoming", was also presented at the event. The photo exhibition organized by the Ukrainian Institute of Public Diplomacy and the Baltic-Black Sea Security Confederation shows how Ukraine is overcoming the most difficult challenges of the time, the occupation of its land and the large-scale information war. It also highlights the invincible spirit of Ukrainian soldiers. Overcoming in this battle is giving a powerful impetus to the revival of a modern European nation.

The event was attended by Israeli officials, representatives of the diplomatic corps, local community and Ukrainian diaspora in Israel. The film received their standing ovation.

The showing was organized by the Embassy of Ukraine in Israel with the organizational support of Israeli Friends of Ukraine NGO and the honorary consul of Israel in Western Ukraine, Oleh Vyshnyakov.