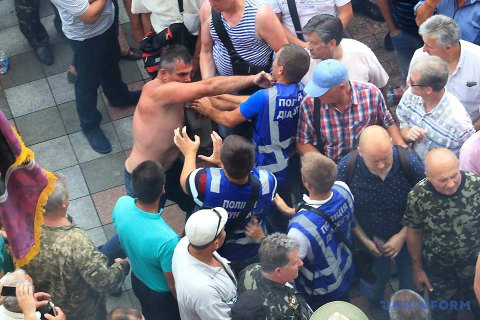 Eight policemen were injured during the riots which broke out near the Ukrainian parliament on 19 June, Kyiv police chief Andriy Kryshchenko has said at a briefing, according to Ukrainian News.

The rally by apparent miners and veterans of the Afghan war, who demanded benefits and higher pensions, turned violent when they tried to storm the front entrance to the parliament.

"Eight police officers requested assistance. As for civilians, we know from doctors that there were two with light scratches. The policemen also have light bodily injuries," he said.

He added that in addition to one protester, who was earlier in the day, one more person was brought to a police station for "pulling police gear and trying to snatch arms".

The tension eased after an initiative group of protesters was invited to parliament for negotiations.