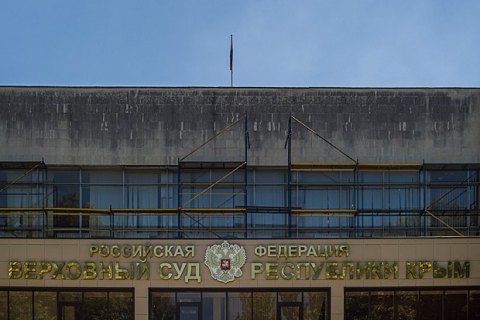 Simferopol's Tsentralnyy district court in Russia-annexed Crimea has sentenced Crimean Tatars Ali Asanov and Mustafa Degermendzhi to four years and six months conditionally and ordered a probation term of three years for each, according to an LB.ua correspondent.

Eskener Emirvaliyev was sentenced to three years and six months, Arsen Yunusov and Eskender Kantemirov to four years conditionally and a three-year probation term each.

All of them were suspects in the so-called "26 February case".

On 26 February 2014, supporters and opponents of Ukraine's territorial integrity rallied in front of the Crimean parliament. The former were represented by Crimean Tatar and pro-Ukrainian activists, the latter by pro-Russian activists masterminded by the Russian Unity leaders who were headed by Serhiy Aksenov, currently the head of government in Crimea.

The court split the case in two later to separately process the case of main suspect Chyyhoz, who was the factual leader of Majlis at the time.

On the initiative of lawyer Dzhemil Temishev, activist Talyat Yunusov and ATR TV camera man Eskender Nebiyev made a deal with investigation and pleaded guilty on condition that their evidence would not be used against other suspects. In December 2015, Yunusov and Nebiyev were given conditional sentences of 3.5 and 2 years respectively.