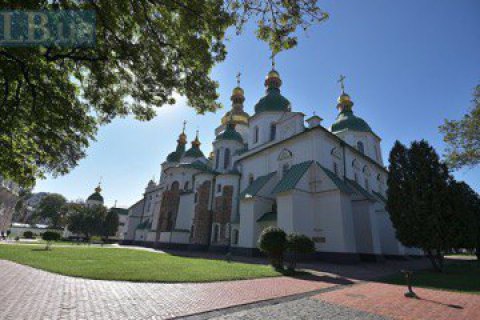 The walls of St. Sophia Cathedral, Kyiv began to be dried using Swiss technology. This will help preserve their integrity, writes nv.ua.

On September 16, a press briefing was held on the territory of the St. Sophia Cathedral on the use of the Swiss BioDry system to remove excess moisture from the walls. This technology is being used to preserve one of the oldest monuments in the history of Kyiv.

“Sophia is very old and sick. The urban environment of our city has told on it. This is an iconic place for our country, and we will do everything for it to delight us for as long as possible. The waterproofing layer of the walls has been ruining during a thousand years in Sophia, and today there is a capillary suction of moisture, the material is getting destroyed. There are many technologies that can help dry the walls, but this requires their partial destruction, which we cannot allow,” said Nelia Kukovalska, Director General of the National Reserve St. Sophia of Kyiv.

The system, which is installed in St. Sophia of Kyiv, had been previously used for such cultural heritage sites as Castello di Masino (Castle of Masino) in Italy, Malbork Castle in Poland, and the Enzo Ferrari Museum.

“The humidity in the walls of the reserve exceeds the norm by about three to four times, in some places – five times. We expect that in the first year this figure will fall about three times; and in three years will be fully normalized. This technology allows you to dry the walls naturally, without resorting to construction works, while maintaining the integrity and original structure,” - said the director of BioDry Ukraine Yehor Zhuchenko.

The technology works on the principle of a passive antenna, which, like a mirror, reflects the waves, charging the wall in the opposite direction, creating a resonance effect. The interaction of the same waves of different directions leads to the attenuation of their strength. This eliminates the primary cause of damp walls and subsequent destruction. Under the influence of gravity water settles back into the soil.

“We have found the most innovative solution used to preserve cultural monuments in the world. This technology is eco-friendly and biocompatible. It is already being used and will naturally eliminate the primary cause of moisture in the foundation and walls, which still hide many secrets and which are still to be revealed, said Dmytro Shymkiv, Chairman of the Board of Directors of Darnitsa Group.

To implement the project of drying the walls of St. Sophia Cathedral and the adjacent monastery buildings from excess moisture helped the pharmaceutical companies Darnitsa and InterChem, as well as the Zagoriy Foundation.

“The reconstruction of Sophia under Ivan Mazepa was a symbol of restoration of Ukraine after the Ruin. I am confident that this joint project of the Zagoriy Foundation, Darnitsa and InterChem Pharmaceutical Companies will be another important step towards restoring the culture of philanthropy in our country,” said co-founder of the Zagoriy Foundation Kateryna Zagoriy.

St. Sophia Cathedral was built in Kyiv in the first half of the 11th century. According to the Tale of Bygone Years, it was built by Prince Yaroslav the Wise. In the 17th-18th centuries under Hetman Ivan Mazepa the cathedral was completely restored and rebuilt from the outside in the style of Ukrainian Baroque. In 1934 it received the museum status, and in 1990 it was included in the UNESCO World Heritage List.