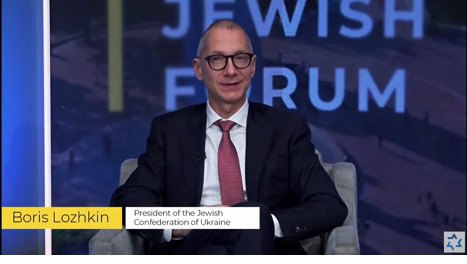 Boris Lozhkin, President of the Jewish Confederation of Ukraine

“I am delighted to welcome participants of the past forums and also those who have joined our worldwide discussion platform for the first time at the third KJF,” he stated.

Lozhkin recalled that diplomatic relations between Ukraine and Israel were established 30 years ago, however, the bond of the two peoples goes far beyond the geographical and time frames of this period, and many important events have taken place over the past year.

“In late September and early October, Kyiv hosted events dedicated to the 80th anniversary of the Babyn Yar tragedy. In our opinion, the history of the Babyn Yar tragedy would be incomplete if we did not honor the memory of also those who saved Jews. I would like to thank Yad Vashem for the provided materials, which formed the basis of the book “Righteous Among the Nations. Ukraine”, published by the Jewish Confederation of Ukraine in partnership with the Babyn Yar Holocaust Memorial Center and the Euro-Asian Jewish Congress. There are 2,674 stories of the Ukrainians-Righteous in it,” said the founder of the Kyiv Jewish Forum.

On May 14, Ukraine celebrated the Day of the Righteous among the Nations in Ukraine for the first time. Another major event was the adoption of the Law on Preventing and Countering Anti-Semitism by the Verkhovna Rada, which laid down a working definition of anti-Semitism by the International Holocaust Remembrance Alliance (IHRA)..

“The principled position of the parliamentarians and President of Ukraine Volodymyr Zelensky played a huge role in the adoption of this important definition,” added Lozhkin.

Let us recall that the first Kyiv Jewish Forum was held in 2019, bringing together 500 guests from different countries. The guests of the third KJF, which takes place on December 15-16 as an online conference, were President of Ukraine Volodymyr Zelensky, President of Israel Isaac Herzog, ministers and experts from various spheres. They will discuss relations between Ukrainians and Jews, the problem of anti-Semitism, Israel’s unique experience as a startup state, as well as issues of culture, progress and democracy.

Earlier, Boris Lozhkin informed that in 2020 the second Kyiv Jewish Forum gathered an audience of 83 thousand viewers and participants.